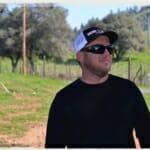 After graduating Bret Harte High School in 1986, Scott moved to southern California to attend college at California State University at Long Beach. Post college, he took a job in the advertising industry as a Media Buyer. A few years later, Scott moved back to Calaveras County. Scott fell into a job working Crush/Harvest season at Stevenot Winery and got bit by the wine bug that very first day on the job. That experience led him to become a student of the wine business. After years of making wine, as well as consulting at several wineries in and around Murphys, Scott and his wife Melanie co-founded their own winery, Newsome Harlow in 2000. Klann spent several years as a Director on the board of CWA, including two years as president. Over the past 20 years Scott has worked tirelessly at building his brand and positioning Newsome Harlow as an anchor in the Calaveras County wine industry. At 51 years old, Scott is now developing a second Calaveras County wine brand (Ten By Ten Wines) and shepherding his two grown children into the wine industry.